NDP urges Sask. Party to get on board with FSIN’s suicide prevention strategy

As suicides continue to disproportionately affect First Nation and Metis families throughout Saskatchewan, the NDP is urging the Sask. Party to support the strategy put forward by the Federation of Sovereign Indigenous Nations (FSIN), and commit the proper funding needed to address this serious issue.

“We know First Nations leaders are experts in the needs of their communities and I would like to thank the FSIN for creating this valuable document,” said NDP Leader Ryan Meili. “Sadly, the Sask. Party government has left the large task of preventing suicides in the hands of the affected communities instead of taking the leadership role and working with them to create a strategy.”

The suicide prevention strategy highlights how social determinants, such as poverty, poor living conditions and racism impact suicidal behaviour. When looking at the recommendations put forward by the World Health Organization and the United Nations, FSIN agrees that community specific and culturally specific needs must be addressed in suicide prevention strategies. The FSIN also recognizes that there is a need for “better leadership at the provincial level.”

“This government has continued to ignore the high rates of suicide in First Nations communities and underfunded programs that provide mental health supports for First Nations,” said Meili. “The Sask. Party must take the suicide crisis seriously, and commit to implementing a suicide prevention strategy for the entire province.”

NDP scores victory in their fight to protect Crown corporations

After years of providing staunch opposition to Bill 40, which gave the Sask. Party back door access to privatizing Crown corporations, the NDP has successfully forced the repeal of said Bill.

“The people of Saskatchewan have been crystal clear that they don’t want to see the Sask. Party sell off any of their Crown corporations. Why it took the Sask. Party years to listen is beyond me and it shows that the Sask. Party can’t be trusted with our Crowns,” said NDP Justice Critic Nicole Sarauer.

In 2016, the Sask. Party promised they would not sell off any of the Crown corporations, but they swiftly passed Bill 40 despite opposition from the NDP and the people of Saskatchewan. Not long after, they sold off the STC, leaving people and businesses throughout Saskatchewan stranded.

Up until today, the Sask. Party has been adamant that they will not change or repeal the Bill. But alongside many across the province, the Official Opposition continued to push the Sask. Party, and today, they finally accepted an amendment proposed by the opposition that would finally repeal Bill 40.

“This is a win for the people of the province, who will remain the rightful owners of our Crown corporations,” said Sarauer. “But the Sask. Party themselves said that they needed this Bill to sell off STC, and with their past actions, even with this significant stride, it’s hard to trust that the Sask. Party with our Crowns.” 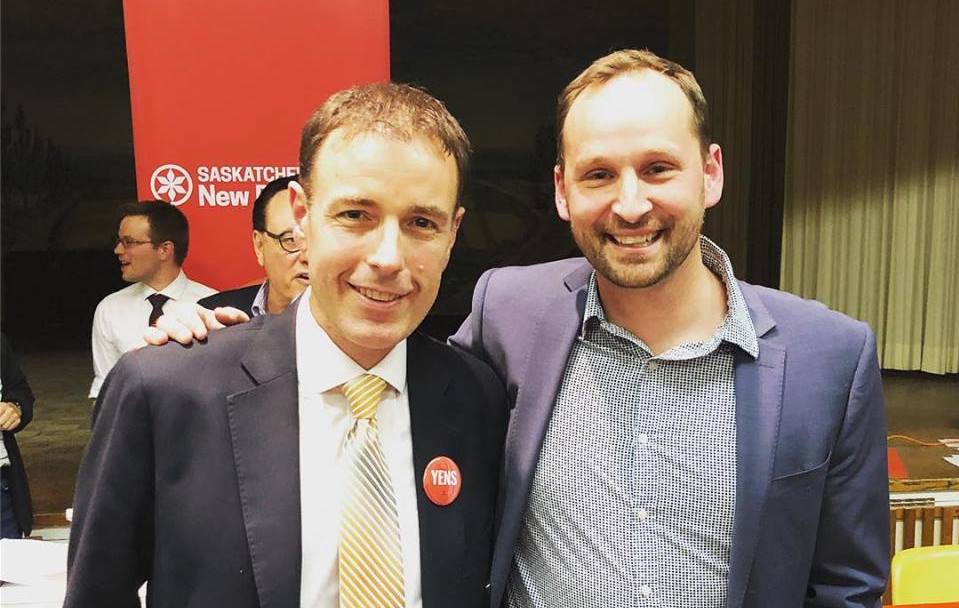 “The Sask. Party has been taking people’s support for granted. This by-election is a chance for the people of Regina Northeast to send a message to the government that they are fed up with the Sask. Party paying for their mismanagement through cuts on the backs of the most vulnerable,” saidPedersen.

Yens Pedersen grew up on a small family farm near Cut Knife. He has worked as a lawyer in Regina for 20 years, representing family owned businesses, farmers, and individuals.

Yens is an active community member teaching beekeeping classes and having served on various non-profit boards and on the School Community Council at his daughters' school.

“Yens will be a strong voice in the Legislature for the people of Regina Northeast,” said NDP Leader Ryan Meili. “New Democrats packed the hall tonight and I know we'll be working hard every day from now until the by-election to elect this dedicated community leader."

Find out more about Yens or get involved with his campaign at: https://www.saskndp.ca/pedersen

Posted on January 31, 2018
Kindersley – Travis Hebert was nominated tonight to be Saskatchewan NDP candidate for the Kindersley by-election.
“The Sask. Party’s heartless cuts are making life more difficult for Saskatchewan people,” said Hebert. “I have seen friends and classmates at university make decisions no one should have to make, like whether to pay for books or food.”
Hebert grew up in Kindersley, attending Westberry Elementary School and Kindersley Composite School before graduating from Rosthern Junior College. He went on the attend the University of Saskatchewan, pursuing a Double Honours in Political Studies and Sociology. Hebert has deep roots in Kindersley having spent time working at the Kindersley Inn, Luseland Bible Camp, Dairy Queen, the Mediterranean Coliseum, and being a referee for local hockey games.
Hebert is the President of the Arts & Science Students’ Union, which oversees the affairs of 10,000 U of S students enrolled in the College of Arts & Science. In addition, he has volunteered with and helped raise funds for several community organizations, including Habitat For Humanity, CHEP Good Food, and the Student Wellness Initiative Towards Community Health.
“Travis brings energy, passion and commitment to everything he does,” said NDP Interim Leader Nicole Sarauer. “Travis is a fresh voice for positive change.”
You can find out more about Travis, donate to his campaign, sign up to volunteer or pledge your vote on his website at: www.saskndp.ca/hebert
Read more
Facebook Twitter Email Share…

New Democrats selected Lorne Schroeder to be their candidate in the upcoming by-election in Melfort.

Schroeder is an organic beef farmer near LeRoy where he lives with his wife Theresa. They have five children and ten grandchildren. Schroeder has always been very active in the community. He served one term as the Reeve for the RM of Leroy, he serves on the board of the Farmer Direct Co-op and he has previously served as the LeRoy School Board Chair, on the LeRoy Credit Union board, LeRoy Ball club, curling club and Kinsmen Club.

“Lorne has deep roots in the community and he is a strong voice for rural Saskatchewan,” said NDP Interim Leader Nicole Sarauer. “Lorne is passionate about seeing everyone succeed and will speak out for everyone whose lives have been made more difficult by the Sask. Party’s heartless cuts.”

You can find out more about Lorne, donate to his campaign, pledge your vote or sign up to volunteer on his website at: http://www.saskndp.ca/schroeder

New Democrats selected Stefan Rumpel to be their candidate in the upcoming by-election in Swift Current.

“The Sask. Party’s heartless cuts to our hospitals and classrooms are hurting Saskatchewan People” said Rumpel. “This by-election is an opportunity for the people of this constituency to send a clear message that the Sask. Party needs to stop making Saskatchewan people pay the price for their mismanagement.”

Rumpel is a teacher at Swift Current Comprehensive High School and artist who is deeply involved in his community.  He has volunteered on the Chautauqua Theatre Festival organizing committee, served on the Saskatchewan Drama Association board and is the owner and manager of Swift Current Improvisational Theatre.

“Stefan is deeply rooted in his community and is a strong voice for education,” said NDP Interim Leader Nicole Sarauer. “As a teacher Stefan sees the impacts of the Sask. Party’s heartless cuts to our classrooms every day.”

You can find out more about Lorne, donate to his campaign, pledge your vote or sign up to volunteer on his website at:  http://www.saskndp.ca/rumpel

Our Youth Leadership Debate, a debate between Trent Wotherspoon & Ryan Meili hosted in cooperation with the Saskatchewan Young New Democrats and the U of S Campus NDP is starts at 7pm on Monday, January 15 – and you can watch live from wherever you are:

For tonight's debate we will be taking several questions from twitter during the debate. If you are watching along and want to submit a question, simply tweet your question to @Sask_NDP.

Tune into the livestream now – the debate will begin in just a few moments:

Hundreds of Saskatchewan NDP members gathered at their annual convention this weekend to build on the momentum they’ve seen over the past year and discuss plans for strengthening their fight for Saskatchewan people.