Broten announced that pledge in Regina Saturday. Saskatchewan is the only province that charges people for ambulance transfers between facilities, and one of only two that applies a per-kilometre charge on top of the basic charge.

A break for middle-income families, a small tax increase for $175,000-plus individuals

NDP Leader Cam Broten made a commitment to middle-class affordability Friday, promising a modest tax adjustment that will lower taxes for 70 per cent of Saskatchewan households.

Brad Wall personally signed the order to pay more than triple the appraised value of a piece of land near the Global Transportation Hub (GTH), and with Wall’s statements since that scandal now proved untrue, NDP Leader Cam Broten said it’s time for Wall to come clean.

The Sask. Party has quietly eliminated all funding for the Saskatchewan Organization of Heritage Languages (SOHL) – a slash the NDP says is cold, short-sighted, and another troubling indication that deep cuts are in the works.

Now, NDP deputy leader Trent Wotherspoon is demanding the Sask. Party release a full list of their cuts, and a transparent account of what they plan to cut next.

Bill Boyd alone racked up nearly $400,000 in flight costs, mostly to and from home

The Sask. Party is the last provincial government with a taxpayer-funded fleet of airplanes exclusively for the premier and cabinet ministers – and Cam Broten is planning to end that entitlement and sell the planes.

Making that announcement on Monday, Broten pointed to flight manifests that show Brad Wall’s senior minister, Bill Boyd, using the planes like a personal taxi. In the current term alone, Boyd billed the taxpayers for $245,847.12 just for personal flight mileage and at least $148,000 more for special flight privilege charges.

“It’s a beautiful drive from Regina to Eston – there’s no good reason for Mr. Boyd to require his own personal flight just to go to work in the morning,” said Broten. “But the perks of power have changed the Sask. Party. More and more, they’re in it for themselves.

“It’s time to end the gravy plane for politicians.”

NDP Leader Cam Broten says a judicial inquiry is needed to get to the bottom of Brad Wall's sketchy land deal, in which Wall personally signed an order to pay $21 million for land worth just a fraction of that. Wall’s excuse for that overpayment has now been proven to be misleading.

Wall paid a whopping $103,000 per acre for one particular parcel of land, even though it was appraised at just $30,000 per acre. Two Regina businessmen that had just arranged to buy the land were the recipients of that $21-million cheque. Wall’s excuse for paying more than three times the land’s appraised price was that land values were going up fast. But CBC’s iTeam reported Wednesday evening that the same appraiser valued nearly identical land just across the road at $20,000 to $40,000 per acre more than a year later.

“This is an industry that delivered a huge sense of pride for Saskatchewan, and it also delivered jobs, economic activity, spin-off benefits and millions of dollars directly into the province’s coffers,” said Broten. “Today, I’m saying to Saskatchewan film workers all over the world, come home – and bring your friends with you.”

In March 2012, the Sask. Party eliminated the filmmaking incentive, decimating the industry. Wall concealed his plan to attack film and television production jobs, so the cut came as a shock to thousands of film industry employees and their families.

The NDP has nominated candidates for the provincial election in all 61 constituencies, and it’s the most diverse candidate team in the province’s history. 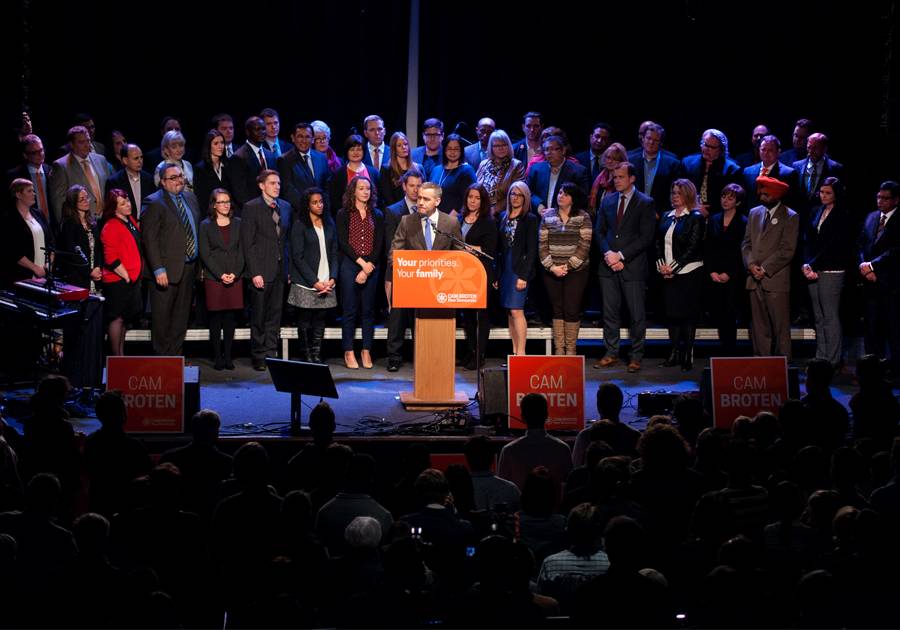 Make a Donation
Become a Member
Sign up to Volunteer
Jobs