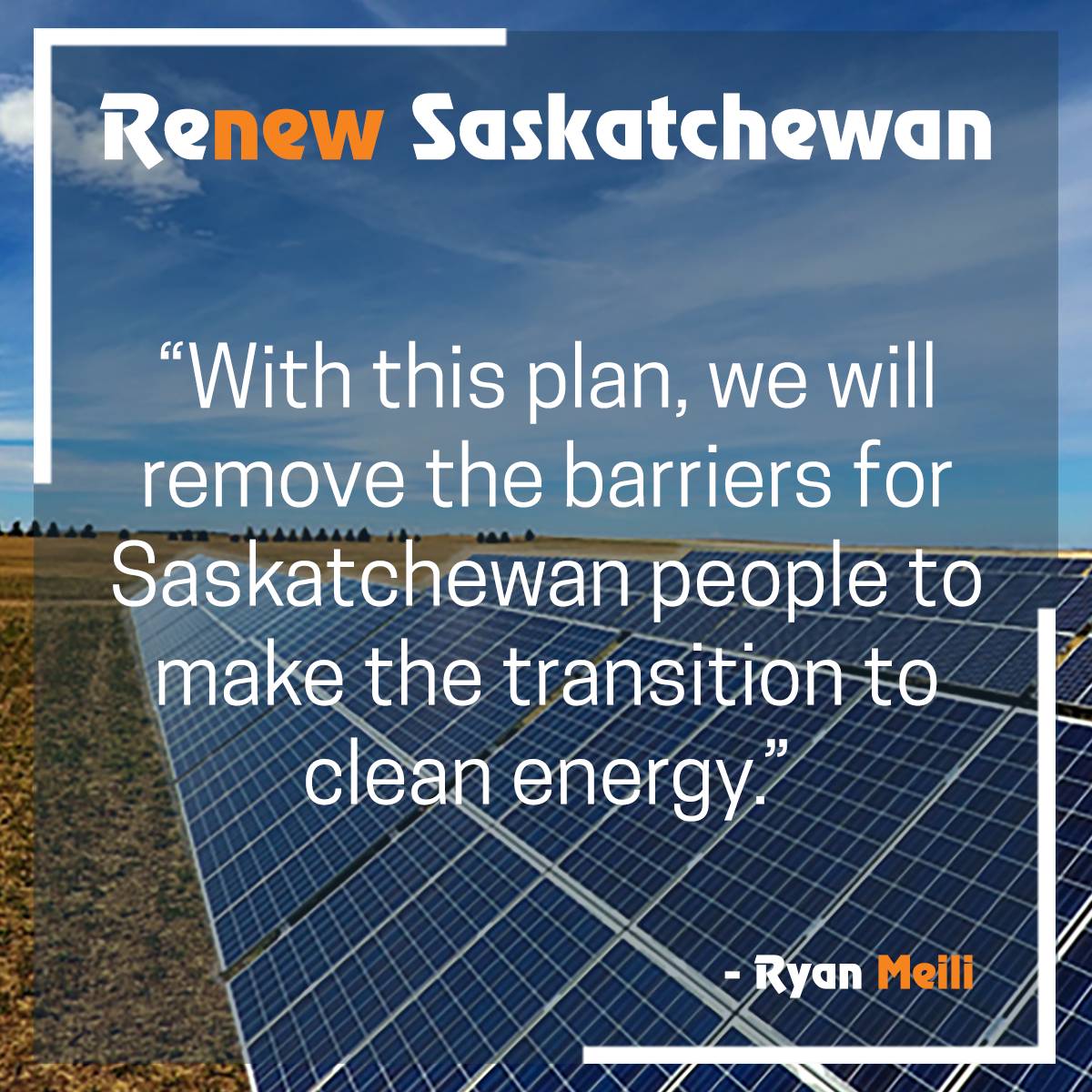 SASKATOON—In his keynote address to NDP convention delegates this morning in Saskatoon, NDP Leader Ryan Meili presented his Renew Saskatchewan plan for removing the barriers that are keeping Saskatchewan families, farms, and businesses from reducing energy usage and shifting to lower-cost, renewable options.

“Climate change demands the best of us, but Saskatchewan has fallen behind. This plan is designed to jump-start the clean energy transition we know we need, meeting the urgency of climate change with the opportunity of low-cost clean energy.”

Similar to past Saskatchewan government innovations like the Rural Electrification Program or the Family Farm Improvement Program, the Renew Saskatchewan plan outlined by Meili would provide assessments and financing for clean energy installations or retrofits for homes, farms, businesses, industry, municipalities and reserves. After an initial assessment to determine the lowest-cost and highest-return option for a given property or organization, some of all of the cost of the installation would be covered by the fund, and would be paid back over time from the customer’s power or energy bills based on the value of the power generated or fossil fuel energy saved by the installation.

“Investment in renewable energy or retrofits of inefficient buildings pay for themselves in the money saved on heat or power,” Meili said. “People want to make the shift to clean energy, but the up-front cost stops them, even though it would save a lot of money over the long term. This plan would remove the barriers that currently prevent people taking action on climate change.”

Glenn Wright, an agricultural producer and engineer with almost 20 years of experience in the resource industry, called the plan an important and urgently needed step forward into the clean energy future Saskatchewan deserves and needs.

“We have the best solar resource in Canada and a lot of room for improvement in energy efficiency” Wright said.  “The NDP plan to focus on clean energy and energy efficiency is exactly what we need to address climate change and grow our economy.”

Rural electrification was a signature development brought in under the first CCF government. A relevant detail for today is that this was a financing plan, where farms paid back the cost of getting transmission lines over time through their power bill.

Another piece of our legacy was something you may not have heard of, but a very successful program called the Family Farm Improvement Branch which helped farms go from relying on outhouses and wells to indoor plumbing and safe drinking water. Both programs started with an assessment of that farm’s particular needs, and included an opportunity to do some of the work themselves and pay less.

It’s now time for a new phase, building on those same principles: a new dream of self-sufficiency and energy efficiency for Saskatchewan.

We have the best conditions for the production of solar energy in the entire country. We have abundant opportunities in wind, geothermal, biomass and other emerging technologies, not to mention the energy savings available through retrofitting and energy efficient new buildings.

We also have SaskPower and SaskEnergy, publicly owned crown corporations operating in the public interest that have ability to change the landscape of power production.

Despite these advantages, we’ve fallen behind. The government has failed to act in any meaningful way, opting for expensive, experimental mega-projects instead of choosing the most affordable and effective ways to reduce emissions.

Saskatchewan people want to take action. Over 80 % support a transition to renewable energy. But for too many, the cost of change is too high when they’re already having a hard time making ends meet.

That’s why today I’m proposing a new program that makes the most of our strengths and positions us as leaders, a program that truly brings power to the people. A program called RENEW SASKATCHEWAN.

The way RENEW would work, is that your home or farm, your business or your town hall, would be assessed and you would get a recommendation of the best changes available, whether its new windows, a high efficiency furnace or a solar array on the roof of the machine shop. Along with that assessment would be an estimate of the time it would take to pay off those improvements with the savings they produce.

Then, and this is the key part, the feature that gets rid of the cost barrier and makes this an opportunity for everyone, that truly brings power to the people, you would get a loan to cover the cost of the work. A loan that would cover the changes needed and that you could repay just by paying your power or gas bill, at a lower rate than you pay today. And when it’s paid back, your bills are either next to nothing, or you may even be making money depending how much energy you’re producing.

It will drop your power bills right away, and in a few years get them down to almost nothing.

It will create revenue opportunities for farmers, homeowners, small towns and reserves through a new approach to net metering that will allow producers to sell extra electricity back to the grid.

It will increase Saskatchewan’s supply of clean electrical power and significantly reduce our use of energy and our carbon emissions.

And, and this is perhaps the most exciting part, as the loans are repaid the money can be re-used, a revolving fund, for the next phase and the phase after that.

Making this dream a reality is a chance to improve our economy and our lives. With RENEW SASKATCHEWAN we have a plan that will remove the cost barriers to a clean energy future.

All of this is possible and more. We’ve renewed the party and we’re ready to renew the province.

Sign up to Volunteer
Make a Donation
Become a Member