Report: 1 in 4 Sask Children in Poverty

The Sask. Party is continuing to let down the most vulnerable in the province, with the University of Regina’s Child and Family Poverty in Saskatchewan: 2019 Report showing that one in four Saskatchewan kids is living in poverty.

“Far too many kids in this province are being let down by their government,” said NDP Leader Ryan Meili. “No child in this province should go to school hungry, but the Sask. Party keeps dragging their feet on reducing child poverty, with devastating consequences for so many kids.”

Meili noted that Saskatchewan remains the only Canadian province without an anti-poverty strategy, and that poverty costs Saskatchewan nearly $4 billion per year in decreased opportunity and increased spending on healthcare, social services and justice. The problem, he says, is exacerbated by an economy slowed and struggling under the weight of bad Sask. Party decisions.

“There is so much we could be doing to get ahead of this problem,” Meili said. “We could start by raising our lowest-in-the-country minimum wage, ensuring that no one working full time has to stop at the foodbank on the way home and putting more money into local businesses.”

According to the U of R report, Saskatchewan has both the third highest rate of child poverty in Canada and the lowest percent reduction in the number of children in poverty as a result of government transfers. The province has also seen the smallest decrease in child poverty rate at 0.7%. 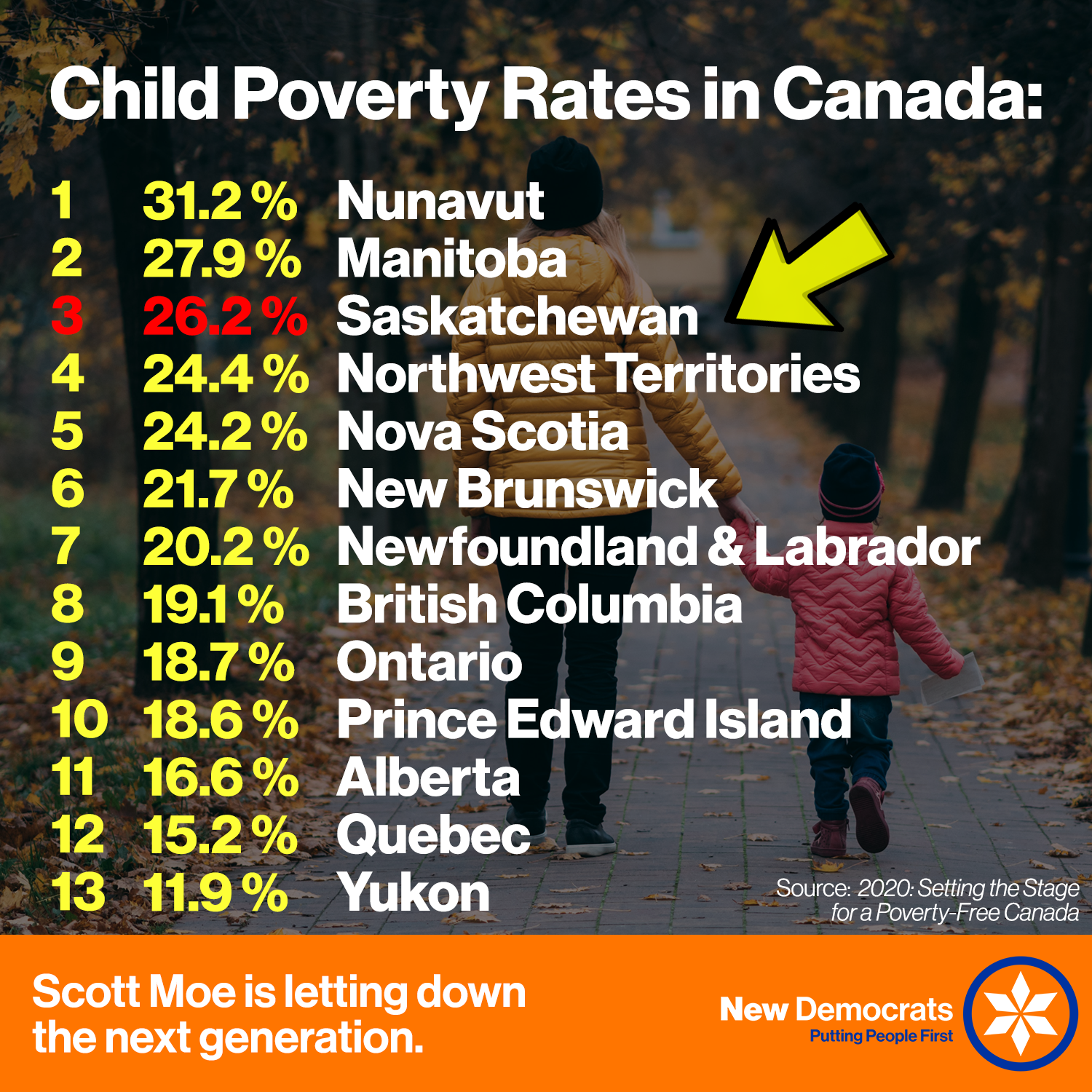 “Landlords, frontline workers and families have raised the alarm about the Sask. Party’s harmful changes to the income assistance program, and I’ve heard from many people who are falling through the cracks because of it,” said NDP Social Services Critic Nicole Rancourt. “If we want to address the heartbreaking numbers of children living in poverty, we need to ensure that families facing poverty have access to the support they need, and that includes fixing the Sask. Party’s unfair changes to income assistance.”

The Sask. Party recently sent a flyer to Regina voters bragging about “investing in Regina’s economy,” but the flyer made no mention of the Regina Bypass, their single biggest expense in 13 years of government.

Why didn’t they mention it? Doesn’t the Sask. Party want to claim responsibility for building the most expensive stretch of flat road in our nation’s history?

“We need a government that will stop letting people down and put people first,” said Nippi-Albright. “From poverty to addictions, the Sask. Party is failing people and it’s time we tackle these problems and stop pretending they don’t exist.”

Vermette to seek re-election in Cumberland

“The Sask. Party is letting people down, particularly in the north,” said Vermette. “We need real action to address the suicide crisis in our province and we need to invest in the supports people need to succeed. I won’t rest until this government stops ignoring the issues facing the people of our province’s north.”

Meili pledged that an NDP government would address the under-resourcing of Saskatchewan classrooms, including a cap on class size for early years and sufficient individualized supports for students requiring extra attention.

“With a New Democrat government there won’t be a single class from K-3 with more than 24 children,” Meili said.

“This government has clearly forgotten about rural Saskatchewan,” said Strykowski. “It’s time to challenge this absent MLA and start putting people first in our constituency again. It starts by improving our local healthcare and education.”

“It’s time to stop the cuts to education and healthcare,” said Borgerson. “It’s time to put people first and present a vision that shows how much we value our communities and the rural fabric of our province.”

Stewart to be The Battlefords candidate for 2020

NORTH BATTLEFORD – Amber Stewart has been nominated as the Saskatchewan New Democrat candidate for The Battlefords. Stewart was confirmed at a nomination meeting last Saturday at the Western Development Museum in North Battleford.

“I want to be the person who sticks up for my community,” said Stewart. “I believe there is good in all of us, and that we can rally around one another and fight for better education and healthcare here in The Battlefords.”

SASKATOON – Matt Love has been nominated as the Saskatchewan New Democrat candidate for Saskatoon Eastview. In winning the nomination, Love defeated two other candidates, Tony Bassett and Keith Jorgensen, in front of hundreds of New Democrats last Thursday.

“As a teacher, I see first-hand the ways that cuts to education are affecting our schools and families,” said Love. “Our school divisions are being asked to do more with less, and it is time that we hold the Sask. Party accountable for their mismanagement and poor decisions. Education is an investment that we need to build a more inclusive, equitable and thriving province.”